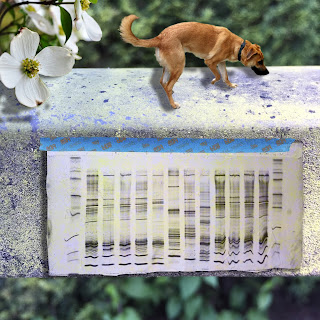 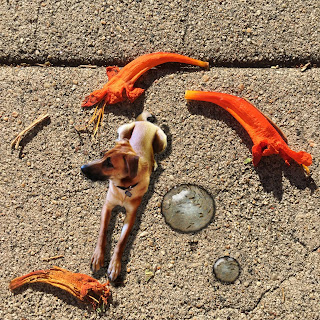 My Dog is a Little Bridge Between the Man-Made and Nature | I was inspired to create these two images by the book I was reading at the time. The book was ostensibly a reference for animal caregivers who might find themselves in the position of having to determine if a stray animal presented to them at a shelter or vet’s office is a dog or a wolf. The philosophy that the authors wanted to put forth is that, if the animal’s suitability as a pet—possibly a matter of life and death—is on the line, the animal should be judged on its behavior and recent history, and not on its looks. The difference between a dog and a wolf, they argue, is pretty much a human construct anyway. And that got me thinking—has there ever been another natural entity as heavily influenced by humans in its biology as a dog? The dog/human connection is in the dog’s DNA—it is the outcome of natural selection that actually is human selection.
In the diptych, my pup ambles across a manmade structure, a concrete handrail or fence, doing what he loves best—enjoying a brief history of smells and other flotsam that man and nature have left behind for his senses.

At rest, he guards a little droplet brimming with life as yet untouched and unaltered by human hands. He seems to know that nothing could be farther from his own story. He is a dog, the animal that men have made from wolves.

There is a bit of an inside joke here, too. My dog is no little sprite—he weighs 108 pounds!

Through my blog, I’ll keep you informed of all things in the realms of art, photography, web technology and design that I am involved in and that capture my imagination.